[MESSAGE from Samsung Electro-Mechanics] How Did a Raft of Ducks Come to Live in the Woncheonricheon Stream in Suwon?

▶1 million tons of purified water that is cleaner than second-grade water (enough to fill the Ilsan lake twice) is released each year... transforming the area into an ecological park sought by fish and birds
- Bringing up water upstream using a pump and then, discharging it to give life to the Woncheonricheon, which was originally a dry stream
- Strict management of pollutant concentration based on SEM's own standard, which is less than 30% of the legal standard

▶The Message of Samsung Electro-Mechanics — Featuring Various ESG Activities through the YouTube Channel
- Capturing the phases of effluent purification and the changes the river purification activities have brought to the ecological park of the Woncheonricheon Stream near the Suwon Plant
- It will show SEM's ESG efforts, such as carbon reduction, water protection, and zero waste landfill 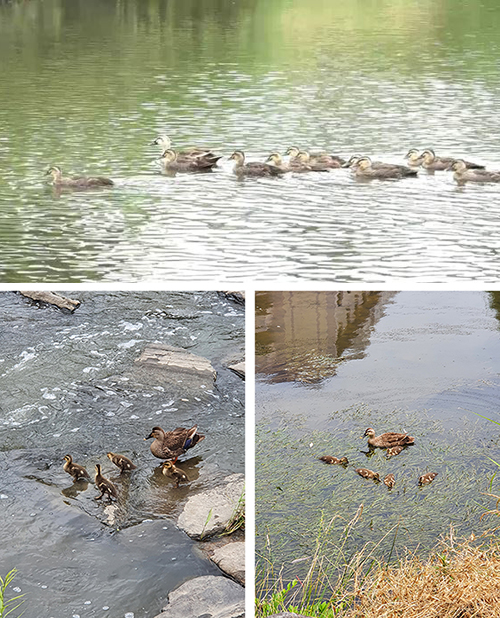 The Woncheonricheon flows right in front of the hind gate of SEM in Maetan-dong, Suwon, Gyeonggi-do. A few days ago, a flock of about ten ducks appeared and are swimming in a leisurely manner in this small river, which is well-known to Samsung employees and the city residents as 'Woncheoncheon'. City people who were out for a lunch walk exclaimed, "It's cute," when they saw the ducklings chasing the mother duck.
Rarely seen in the Woncheonricheon Stream, the paddling of ducks catch prey such as insects and small fish in the water. As the water increased and became clearer, the number of fish such as crucian carp and cornet fish increased, and naturally, the number of waterfowl that prey on them also increased. Various creatures and aquatic plants such as reeds and willows grow to flaunt their verdure in the Woncheonricheon, which serves as a resting space for the residents of Yeongtong-gu, Suwon.

For sustainable business, SEM is implementing its environmental protection activities throughout its production. SEM said that for one thing, an advanced treatment method is applied to all used water generated within the company.

SEM's Suwon plant purifies used water in three stages. The clean water that has undergone a rigorous purification process is pumped upstream and then discharged. The concentration of pollutants in the water discharged from the SEM Suwon plant to the Woncheonricheon, a nearby river, is more strictly managed based on its own standard, which is within 30% of the legal standard. The effluent concentration is monitored in real time, and all data is shared with the Ministry of Environment. The effluent with a cleaner water quality than that of the second grade is added to the Woncheonricheon Stream, whose water quality is the third grade, reducing the concentration of pollutants in the river by about 18% (COD, chemical oxygen demand) and thereby making the river clear to the level of second grade water.

The clean water discharged by SEM into the Woncheonricheon Stream restores its ecological health. It prevents the stream from drying out even in extreme drought, and keeps the water flowing to prevent odors from occurring. The amount of water that SEM discharges into the stream is 1 million tons per year, which is enough to fill Ilsan Lake Park twice. The amount released per day is enough for 13 million adults to drink in one day.

Thanks to these efforts, the Woncheonricheon Stream is being loved as an ecological park where the company employees and the city residents can exercise and relax as the number of fish such as crucian carp and cornet fish increases and the number of waterfowl that feed on them increases. SEM is practicing sustainable ESG in partnership with the local community by reviving nature in the stream and creating a habitat for many living things through various environmental protection activities.

With ESG management emerging as a business management topic, SEM introduces the company's ESG activities through its YouTube channel: The Message of Samsung Electro-Mechanics. The title suggests that SEM's various ESG activities are conveyed to the public in a relatable message.
The first episode, released under the theme of water resources on Jun. 23, described the treatment of water used in SEM and the activities to improve river water quality. SEM plans to introduce through its YouTube channel its ESG management activities under such categories as air and waste that the MZ generation can relate to.

SEM's CEO Chang Duckhyun said, "ESG management activities are emerging as important elements that decide the fate of a company." He added, "SEM will set 'Sustainable Challenges for a Better Planet & Life' as its ESG management mission and plan to actively engage in ESG activities in partnership with the local community."